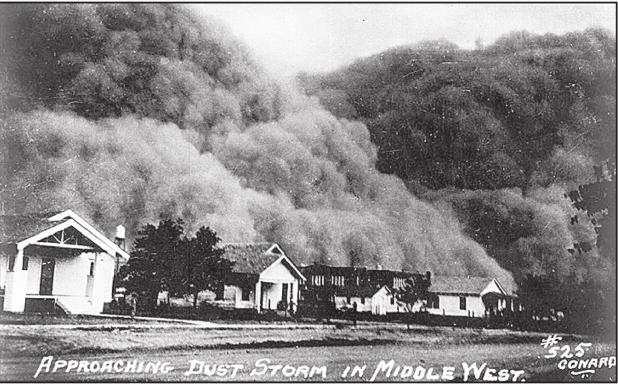 Lincoln County and the Dirty Thirties

The stock market crash followed by the Great Depression, serious drought and dust storms from wind erosion characterized the Dirty Thirties in Lincoln County as in the rest of the country. By May of 1930, the district court had an unprecedented 44 cases on the docket, most of which were foreclosures or suits on unpaid notes. By 1931 many families could barely survive. Merchants contributed clothing, coal and other provisions and bakeries provided bread to ensure county residents had what they needed to get through the winter. In all 500 garments were distributed along with bedding, food and a dozen loads of coal.

Abram Marshall, known as “Uncle Abe,” died in December, 1930. Marshall was a chief builder and promoter of Lincoln. He came to Lincoln in 1880 without funds but with a brilliant head for business. He helped organize the Saline Valley Bank, eventually becoming its president. Marshall served on the city council, the school board, the State Legislature, and was mayor at the time of his death.

In 1932 the Board of County Commissioners established community wood piles in Lincoln, Sylvan Grove, Barnard and Beverly. Men who needed employment would cut and split the wood, receiving credit slips for groceries and clothing as wages. The American Legion assisted with the project. A clothing room was opened in Lincoln City Hall. D.B. Marshall donated 100 bushels of corn which was ground at the Rees Mill and distributed in fivepound bags. Several merchants donated clothing and shoes.